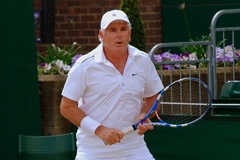 Mr. Paul McNamee is one of the most prominent Australian tennis players and sports administrators. In 1981 he became the world No. 1 at the doubles ATP-ranking. He has won 24 men’s doubles titles, including four Grand Slam doubles titles. He is currently involved in the organization of 2021 Sofia Open. Mr. McNamee is our guest at Cleves Cherkovna.

Paul McNamee: This is the  seventh and, in my opinion, the strongest edition of Sofia Open. To have such world class players as Jannik Sinner, the remarkable double defending champion, top ten player Hubert Hurkacz, multiple Grand Slam winner Stan Wawrinka, the exciting Gael Monfils and so many more top players, it’s really a first class lineup. Then you have the massive bonus of Grigor Dimitrov competing. We can never forget his triumph in 2017, and the joy and pride to Bulgaria which it brought.

Cleves: This year Bulgaria’s tennis star Grigor Dimitrov will compete in Sofia Open. What finals do you expect?

Paul McNamee: Well it’s always risky to make predictions, but there’s no doubt the dream final would be Grigor Dimitrov taking on Jannik Sinner. That would be the biggest match ever staged in Bulgaria, and I can only imagine what the atmosphere would be like in Arena Armeets. And it may happen.

Cleves: We are happy to have you as our guest at Cleves Cherkovna. What do you think of your accommodation?
Paul McNamee: This is my second residential stay with Cleves, and at a different location. Once again, the standard is exemplary. In a central location, with tasteful decor and generous fitout, noise minimisation and outstanding attention to detail and servicing, I am a big fan of Cleves accommodations.

Cleves is the premier owner and operator of rental apartments in Sofia. To find out more, please visit www.cleves.bg or contact us at +359 882215523 и milena@cleves.bg