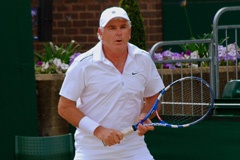 Mr. Paul McNamee is one of the most prominent Australian tennis players and sports administrators. In 1981 he became the world No. 1 at the doubles ATP-ranking. He has won 24 men’s doubles titles, including four Grand Slam doubles titles. He has been active in the organization of world tennis championships, and most recently he was involved in 2020 Sofia Open. Mr. McNamee is our guest at Cleves Este, Sofia’s preferred residence, and we are grateful that he agreed to chat with us.

Cleves: Mr. McNamee, congratulations on the successful organization of ATP  Sofia Open 2020 in these challenging times. What is your overall impression of the tournament and the game played?

Paul McNamee: “Considering the challenges presented by Covid, the 5th edition of Sofia Open in 2020 was excellent. I was personally more at arms length this year, but I must say the management team was very attentive and professional, and should be congratulated. Sofia Open was the only major men’s event in the world in that week, and the images resonating from Arena Armeetz, which looked stunning, presented Bulgaria in a highly favourable light. Yannick Sinner, an Italian teenager, won his first ATP title, the first of many to come no doubt. He has an amazing future, and will become one of the biggest stars in the sport, so it is great that his breakthrough will forever he chronicled as happening in Sofia”.

Cleves: We are delighted to welcome you as our guest at Cleves Este. We trust that you enjoyed our rental apartments. How do you like staying with us?

Paul McNamee: “The ambience, location and, importantly, the service, of Cleves Este could not be faulted. The concierge team is exceptional, ever friendly and helpful. Plaudits also to the maintenance and cleaning personnel... first class. My partner and I could not be more complimentary of a truly first class serviced residence”.

Cleves: We hope to see you again in Sofia!

Paul McNamee: “Well I do intend to return soon to Sofia, hopefully to Cleves Este”.