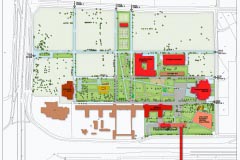 Building work is underway on the new Sofia Tech Park – a €50m project part-funded by the EU and taking shape on a 90 acre site close to the Cleves Este and Cleves Izgrev buildings.

Sofia Tech Park has weighty backing from Bulgaria’s President, and he brings real-world experience to it: before becoming a politician he was the entrepreneur behind the hugely successful Sofia Business Park. Opened in 2001, today 10,000 people work there.

Bulgaria has a long-tradition in technology, and ranks third in the world in certified IT professionals per capita. Sofia is home to much high-tech outsourcing (e.g. HP, IBM, Microsoft, Oracle, Skrill) and research and development (e.g. SAP, VMWare, Interoute). The sector employs over 40,000 people.

Sofia Tech Park’s mission is to foster Bulgarian start-ups in the fields of information & communication technologies, biotech, and renewables. Seed and venture capital has started flowing in, with 120 startups receiving €21m of funding over the last two years. One example of success is Telerik, a software development business started by four young Sofia postgraduates and recently sold to a US company for $262.5m.