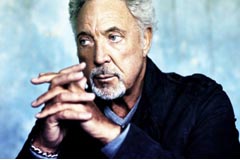 Tom Jones, the Welsh popular singer, will be back in Sofia and holding a concert at 7.00pm on October 30 in Hall 1 of the National Palace of Culture.

According to Wikipedia, Tom Jones has sold over 100million albums in the course of his 40-year career.

His concert in Sofia is likely to include songs from his latest album “Spirit in the Room”.