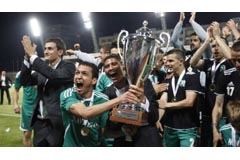 Ludogorets Razgrad has been in the news recently about their forthcoming UEFA champions’ league match against FC Basel.

More interesting is the remarkable trajectory over the past two years of this 'Cinderella of Bulgarian football', as Dian Stanchev has called them.

As he explains in this article, for years the club played mainly in the lower echelons of Bulgarian football. But in the 2009/2010 season they did well enough to be promoted to the Second Division.

The next year a local businessman bought the club and decided to invest. They won the Second Division and gained promotion to the Premier Division for the first time.

In their first ever season in the Premier Division, Ludogorets Razgrad won both the championship and the Bulgarian Cup -  a remarkable achievement.