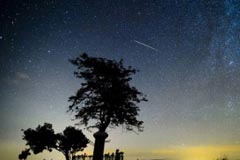 If the weather is clear tonight, Bulgaria will again have a chance to see the Perseid meteor shower - dust particles burning up in Earth’s atmosphere.

As Sofia Globe explains: “The Perseid meteor shower happens every August as planet Earth passes through the dust particles of the Swift-Tuttle comet, causing the spray of shooting stars named for the constellation Perseus, the point in the sky from which the meteor shower appears to originate.”

Viewing tip from NASA: “The Perseids are best viewed in the Northern Hemisphere during the pre-dawn hours, though at times it is possible to view meteors from this shower as early as 10:00 p.m.

"Find an area well away from city or street lights. Come prepared with a sleeping bag, blanket or lawn chair. Lie flat on your back with your feet facing northeast and look up, taking in as much of the sky as possible After about 30 minutes in the dark, your eyes will adapt and you will begin to see meteors.

"Be patient -- the show will last until dawn, so you have plenty of time to catch a glimpse.”