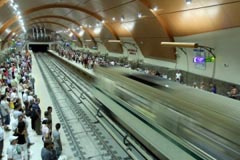 Details of Sofia’s third Metro line have been announced: it will be 16 km long with 19 stations. Passenger flow is estimated at 162 000 passengers per day.

Only 53% of the new line, which will connect the southwestern and northeastern parts of the city, will be underground.

The last stop will be at the Sofia-Pernik railway line, where a new station will be opened.

The cost will be ?680 million, to be co-financed by Sofia city and the EU Environment Operational Programme.

Some of our readers are also interested in rent in Sofia.