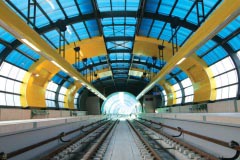 Metro to the Airport

Last week the tenants of two Cleves buildings – Este and Izgrev – got a new benefit: they can now reach Sofia Airport in under 12 minutes via a newly opened extension to the Metro.

Sofia Metro has been a great success. A ride anywhere on the system costs only ?0.50. Its popularity has taken tens of thousands of cars and motorbikes off the streets of Sofia.

Over recent years two interconnected Metro lines have been opened, serving 31 stations and with a total route length of 36 kilometers.