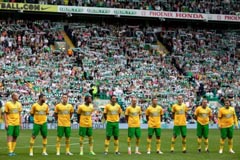 Outpouring of support for Stiliyan Petrov

Today’s British newspapers are full of reports about the emotional football match yesterday attended by 60,000 in Glasgow in support of much-loved Stiliyan Petrov and his battle with leukemia.

Stilyan Petrov played for many years in the UK, both for Celtic and for Arsenal, which he captained.

Petrov, who is in remission from acute leukaemia, played for half an hour before leaving to a standing ovation.