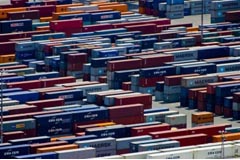 According to World Trade Organization (WTO) data, Bulgaria had a good year for exports in 2012. In terms of export revenues, it was 65th in the world - 4 places up on 2011.

The pharmaceutical sector performed well in 2012 with exports up by 22%.

Bulgaria is the world's 17th largest exporter of electricity, with Greece, Turkey, Macedonia, Serbia, Romania as the main buyers.

Bulgaria is the world’s 12th largest wheat exporter, with Spain, Italy, Romania and Greece as its top markets.

Bulgaria is the world’s second largest exporter of sunflower seeds, capturing 14% of the global market in 2012.

Cigarette exports were the biggest export success of the year – up 49%, with Iraq the main destination.