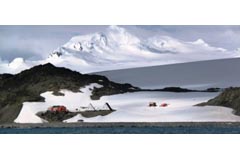 Who knew? Since 1988 Bulgaria has operated an Antarctic Base.

Called “St. Kliment Ohridski”, it is in the eastern part of Livingston Island, South Shetland Islands.

Around 25 scientists work there during summer months, doing research work in areas such as geology, biology, glaciology and topography.

An office of the Bulgarian Posts has been operating there since 1994: postal code BG 1090.

In 2015 Bulgaria will host the annual Antarctic Treaty Consultative meeting.