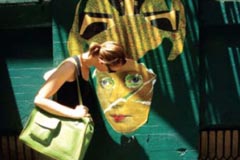 Running at the National Museum of Contemporary Art until 31st January is an exhibition of photographs by Macedonian film director, Milcho Manchevski.

In his words, in Five Drops of Dream “I am interested in two things: 1. The explosion of the visual in the mundane moment; and 2. The wrestle and embrace of the narrative and the formal.”

Thanks to In Your Pocket Guide for telling us about this.